Looking for clever fundraising ideas? Here's one: The Smithtown Historical Society offers a fun spin on popular casino nights. The event's co-chair offers the secrets of the party's success.

For the past five years, on the first Saturday night in March, residents of Smithtown, New York, have enjoyed a dress-up night of "gambling" at the Society's "Naughty Night Out," a Roaring Twenties-themed fundraiser. 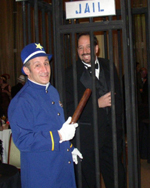 "We came up with that idea because we wanted something a bit different than the usual Las Vegas and Monte Carlo nights," says 2006 event co-chair, Deanna Varricchio, Smithtown's receiver of taxes.

One reason for the event's success, she says, is the contrast between the sedate nature of the Society's mission--to preserve the historical heritage of the Township and of Long Island--and the raucous, fun-filled frivolity of the evening's activities.

One of the biggest attractions was "In and Out of Jail," which involved "imprisoning" prominent members of the community in a "jail" built by a talented local contractor. (See photo above). "People could pay $5 to bail the prisoner out, or $5 to keep him or her in jail for a while longer." It's easy to figure out what most people chose to pay for, she jokes.

Gambling, of course, was the major money-maker of the evening. Classic Casino Productions, of Wantagh, which has run the event's casino operations from the beginning, provided card tables and a range of casino equipment, including a real slot machine donated by the company and auctioned off at the end of the evening.

"Bootleg beverages" were offered throughout the evening and the pacing of the food service was carefully planned, Varricchio notes. Guests arrived to hors d'oeuvres being passed, and platters of cheese, nuts, and fruit placed at stations around the room. At 9 p.m., a hot buffet was served. Seating was intentionally limited and tables were small. "The whole idea was to keep people gambling," she explains.

Naughty Night Out also featured a Chinese auction and a number of door prizes. "This event has become familiar to local merchants, who have been very generous in their support," she says, referring to the range of gift certificates, merchandise, and services donated to the organization--including a dinner cruise on one supporter's private yacht.

One trend Varricchio says she's noticed is that every year, more people arrive in full '20s regalia. "At first, the only people in costumes were those running the event," she recalls. "This year, about 75% of the women were in costume. One woman had her hair done completely in finger waves for the event. Many others created the flapper look by wearing headbands made from strings of costume jewelry pearls.

"The real surprise is that the some of the men got into it, too," she adds. "This year, about 10 men actually rented costumes."

Costumes will probably remain part of the Society's future event plans, Varricchio predicts. And at least for now, gambling remains a real crowd pleaser. But in the interest of variety, Naughty Night Out could make way for an evening in, say, a Wild West saloon. "Probably everyone would come in costume if we did that," she says with a laugh.

Whatever the theme, the Smithtown Historical Society will undoubtedly plan future fundraisers based on the idea that has worked so well for them. "It's simple," Varricchio maintains. "Just give people an evening filled with fun." 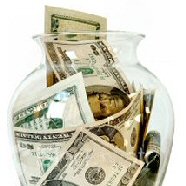 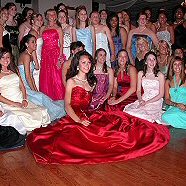 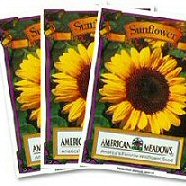